Vitiligo is a chronic skin disease characterized by smooth, white patches of skin due to the loss of natural skin color. Vitiligo can also affect other parts of the body, including hair, eyes, and the inside of the mouth. It is caused when the immune system damages the cells, called melanocytes, which provide color to the skin and hair. Vitiligo can severely impact quality of life and psychological wellbeing due to its appearance and visibility.1

Vitiligo is the most common skin depigmentation (color loss) disorder, affecting between 0.5% to 2% of people of all ages, sexes, and ethnicities, worldwide. The majority (70–80%) of patients with vitiligo experience disease onset before age 30 years. Approximately 30% have childhood-onset vitiligo before aged 12 years.1,2

Most people have vitiligo for the rest of their lives, during which they will experience cycles of flare-ups, stabilization, and spontaneous re-coloration of affected areas.1 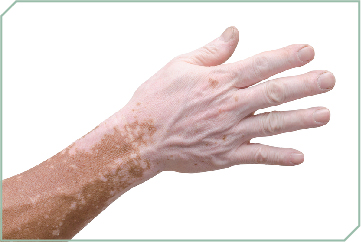 There are two major forms of vitiligo, non-segmental and segmental, but the term ‘vitiligo’ is often used to describe non-segmental vitiligo as this is the most common form of the disease.1,3

Non-segmental vitiligo (also called bilateral or generalized vitiligo) often appears symmetrically on both sides of the body. Loss of color in the skin usually evolves over time, initially affecting the face, hands, and feet, and progressing to be more generalized.1,3

In segmental vitiligo, pigment loss occurs on one side of the body, is associated with earlier onset, and usually involves depigmentation of the hair as well as the skin.1,3 The appearance of depigmented areas can be unpredictable and can vary between patients and over time.1

The psychological impact of vitiligo is commonly associated with depression, anxiety, low self-esteem, and social isolation, which are important factors in the management of patients with vitiligo.1

Vitiligo is a multifactorial autoimmune inflammatory disease linked to both genetic and environmental factors. Although the exact trigger that initiates depigmentation is not fully understood, melanocytes of people with vitiligo appear to be more susceptible to environmental factors such as ultra-violet (UV) light and chemicals.4 Vitiligo is not contagious and cannot be transmitted by touching someone who has it.

The American Vitiligo Foundation
Vitiligo Support International
Dermavant is not responsible for the website content of external links.

The information presented on this website is intended for educational purposes only. Readers are encouraged to consult their healthcare providers for further information.